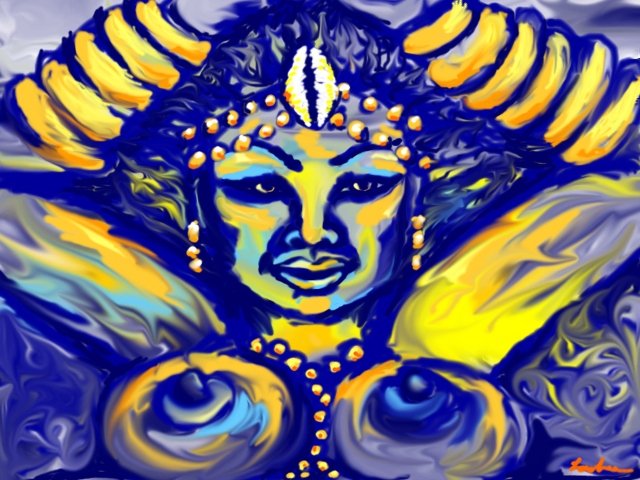 Aje Shaluga is the Yoruba deity of material wealth, money, currency, markets, and trade. She is also the Orisha of dyes and pigments.  She is a water deity born from Yemaya and Obatala. In most places in Yorubaland, he is male, but in some places and much of the diaspora, she is female or androgynous, or their gender is not specified because it is not considered important. Her first earthly incarnation or manifestation is said to be from Kemet.

Her embodiment on most altars is a large cowrie shell.  Often this is filled with coins and/or paper currency from many nations, jewels, or other valuables.

Her sacred number in some traditions is the same as Oshun's, 5 and multiples of 5, because they are so strongly connected. Sometimes it is 7 because of her connection with Yemaya. Some choose to include both 5 and 7.  Her sacred colors are blue and yellow/gold or yellow and green or yellow, green, and cream/beige. She is compatible with all Orishas, so there is no worry over where to place her items on your altar or storage. Ile Baalat Teva chooses to have her yearly holiday on July 5-7 even though the big offerings are given along with Oshun's festival in August. This is because the original Yoruba date is unknown, but cowries generally mate and lay eggs in July.

Her symbols are any monetary symbol such as "$" or symbols of exchange such as "X" or various ideograms depicting her attributes, role, or function. 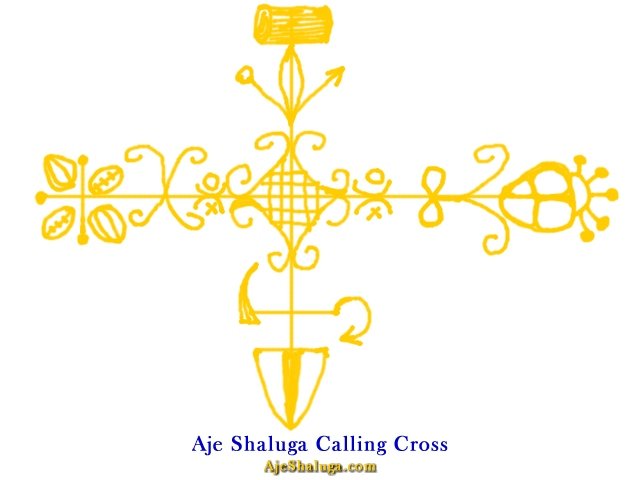 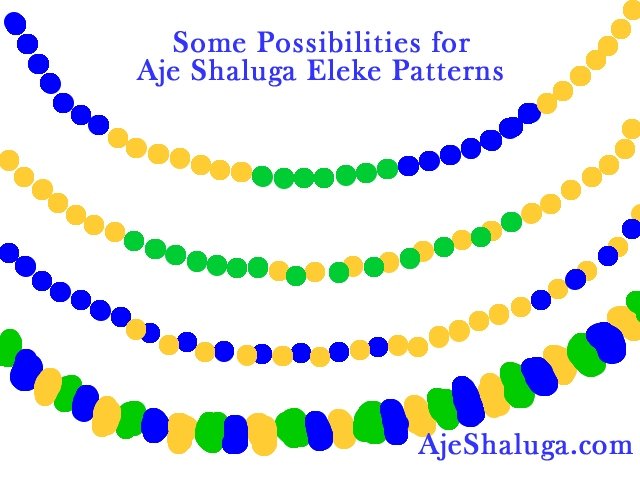 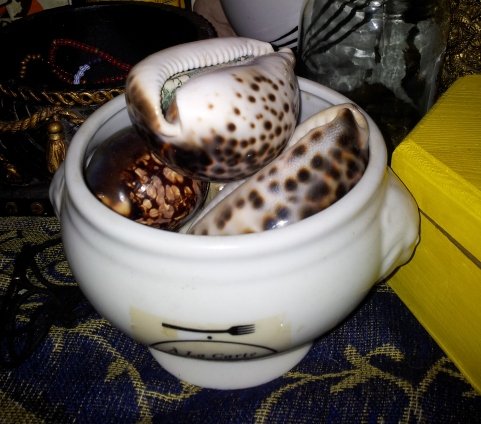 In the stories or apatakis about Aje Shaluga, she appears as an example of generosity and result of intelligent effort or good fortune. On the index page, there is a story in which she saved Oshun from poverty.  In another, when Eshu came to a crossroads to get donations for the poor, the rich were hesitant, so he threw stones that burned their houses down.  So Aje Shaluga appeared herself with many cowries, and there were enough for Eshu to make a cape.  So in many of the more well equipped shrines, there is a cape of cowries.  This cape reminds us that poverty is man made. The Orishas/Nature provide us with more than enough to live. It is only man's selfishness that leads to situations where anyone would not be able to provide for their needs.  So since the rich create the situation of poverty, it is their responsibility to prevent or solve poverty. If they do not then Eshu will burn their house down. 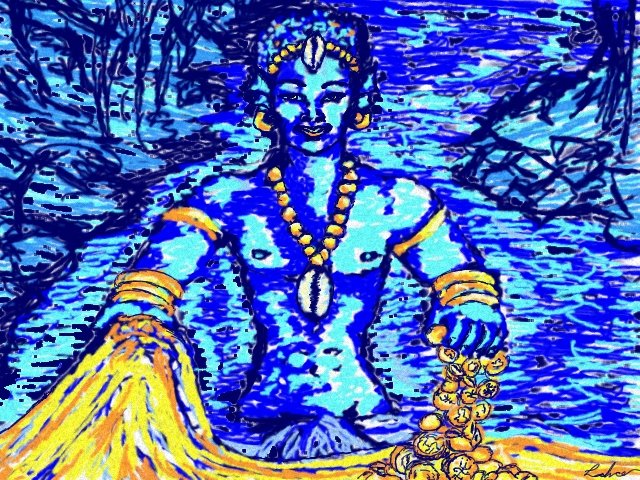 For this reason, an ebbo is very rarely a sacrifice in Vodun or diaspora traditions. Someone living needs to benefit from at least a part of the offerings or actions unless an offering needs to be disposed of in a specific way.  Even in the case of an immolation, ashes are usually given to plants or go into making lye for sacred soaps or other uses. It is good to be generous and not wasteful.

On the other hand, there is the saying that there is no ebbo without Aje Shaluga. This means that one must invest something in order for a prayer to be meaningful as more than wishful thinking. So we don't go to the spirits emptyhanded though if we have no other option or if it is an ebbo that doesn't involve material offerings, we have sweated, fasted, bled, or given some kind of effort for it. The spirits don't need our offerings, but we need to give them.

As the Orisha of dyes and pigments, she is responsible for the chemistry of the variety of colors in our world, including melanin, chlorophyll, and other natural colorings. She blesses the dyeing process for her adherents and makes the colors last longer and turn out brighter. Painters, decorators, and makeup artists also give to her to bless their projects.  Some believe that when a person is born differently colored (skin or hair) than either of their parents or most of their siblings, this is a sign that they will be wealthy because Aje Shaluga has marked them.

People marked by Aje Shaluga may be of any head, as she is compatible with all. All children of Oshun carry Aje Shaluga with her though. So, to be well aligned, it is important for children of Oshun to know how to manage money well and to teach others to be resourceful and mindful about the material aspects of prosperity.

For food offerings, like her wife Oshun, Aje Shaluga enjoys sweets. She also enjoys very high-carb foods like dumplings. In the diaspora, we make her sweet filled dumplings from wheat, rice, or bean flour, or stew with dumplings. In Africa, they make her ekuru funfun which is a dumpling made from white beans.  She is not as fancy, but she appreciates someone putting time and care into things.

Another good thing one can do for Aje Shaluga is to clean a body of fresh water, especially a river, or help to keep it clean and free of pollution. Donating to causes that protect bodies of water are excellent offerings to Aje Shaluga. Some believe that for every shard of broken glass they remove from a beach or the area around a body of water, they will be blessed with their local basic unit of money. Imagine the blessings you'd receive for cleaning up or preventing an oil spill or chemical pollution.

Then there is the good old fashioned ebbo for Oshun or giving to a temple or child of Oshun. Oshun and Aje Shaluga are so close that giving to Oshun automatically makes Aje Shaluga happy.

An interesting thing some do to give to Eshu and Aje Shaluga is to hide or put gifts in various places where they are likely to be found by the poor or people who need cheering up. Any time you can invest resources or work into helping people in tangible, practical ways, this glorifies Aje Shaluga. 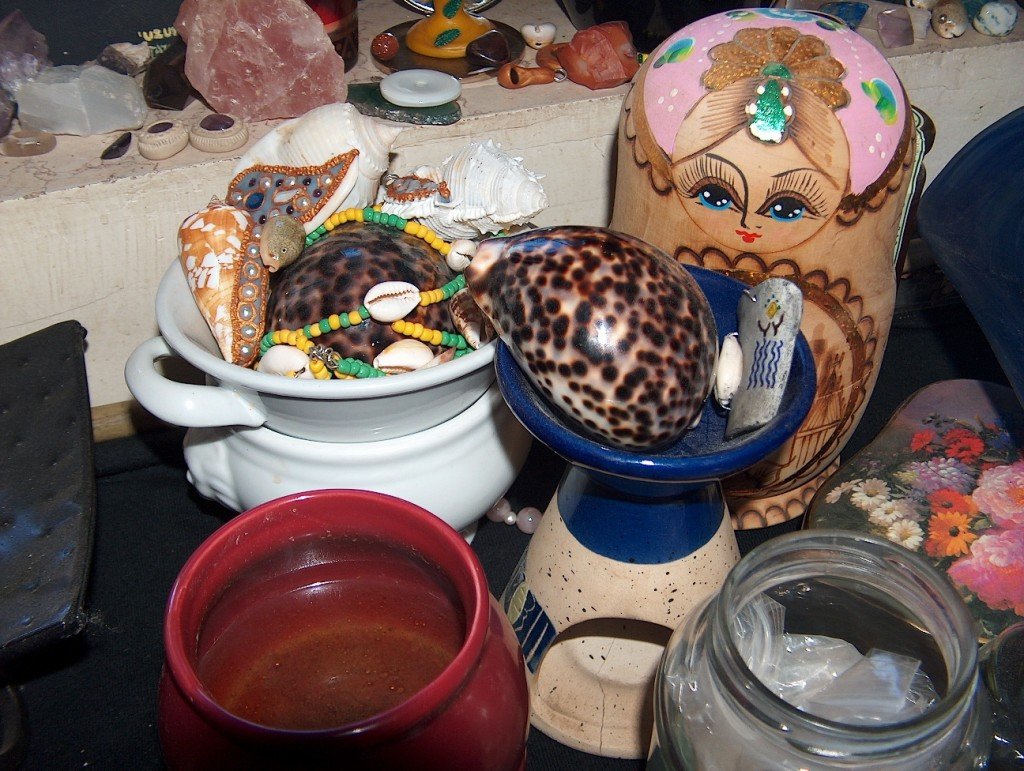 Store it in a pretty yellow, blue, or green container or jar. 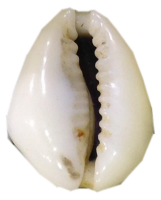 This site is for spirituality and entertainment only. None of the articles or advice here  are intended to replace the recommendations of licensed medical or other health professionals.
Though some of the information here is considered traditional, the articles, recipes, and photos are not public domain. Please do not republish them anywhere without posting a visible, working link back to this website.